If you own a Nokia touch-screen device with Symbian 60 5th edition, I am pretty sure you’d complaining the limited choices of the homescreen in the device (except N97 and N97 mini, they are widget-supported which I still don’t understand why it doesn’t get ported to other Symbian 60 5th Edition phone). The best homescreen provided by Nokia is the ‘Contact Bar’ (screenshot at left), which seems nice at first glance, but it does take up huge amount of RAM, and laggy. Compared to the widget homescreen in N97/N97 mini (screenshot at right), the default homescreen doesn’t really seems appeal for long-time smartphone users (at least for me). I was always hoping someone is able to port the N97 homescreen to other phones, and apparently someone did it, though it is still in beta stage and there is no easy way to get installed in Nokia X6/5800/5530.

But after being a Nokia X6 owner for about half a year, it seems that my hope has been realized (though not the native widget homescreen in N97, but still far more better than the default one) – Introducing Orange Tsunami Homescreen. If you have no idea how this homescreen looks like, screenshots after the jump. 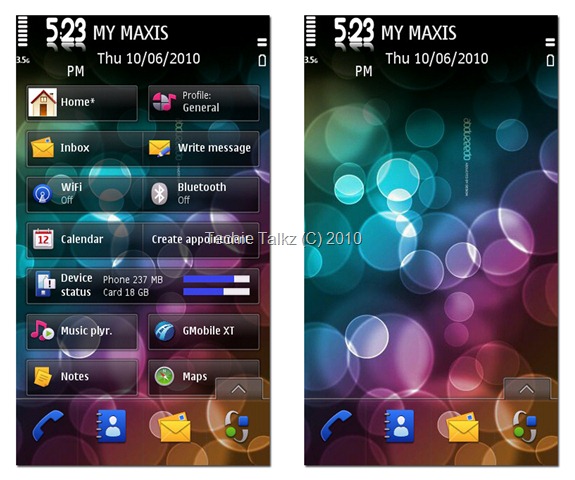 The left screenshot shows the Orange Tsunami Homescreen theme in action, with the widgets in the middle area of homescreen, and four shortcuts (not customizable though) at the bottom bar. If you wish to have your homescreen’s widgets temporarily disappear, you only need to scroll the widgets (yes, the homescreen is scrollable!) to the top and voila!, it became a clean homescreen, as shown in right screenshot. Easy isn’t? 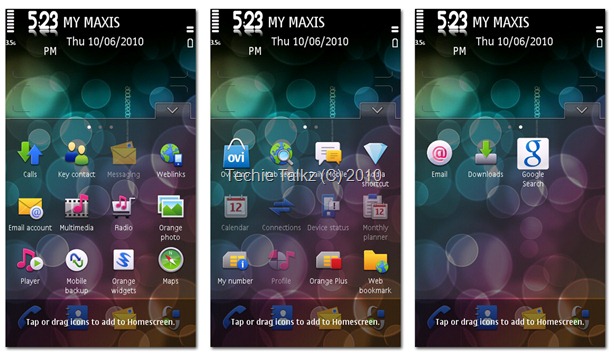 As you can see in the screenshots, Orange Tsunami Homescreen is a widget-supported homescreen, though the widgets are all pre-installed and almost non-expandable. There are three pages of widgets available for you to add into the homescreen (just tap or drag the icons), and I find them pretty adequate for a homescreen (definitely far better than the default ones).

If you curious about the source of this homescreen, it is actually ripped from a Nokia X6 (surprised?) from Orange. Someone rip the whole homescreen theme and make it work on other S60 5th edition devices (Nokia X6, 5800, 5530 etc.), and since the first version, the Orange Tsunami Homescreen has been heavily modified by community (change icons, transparency, extra widgets etc.). So how about the memory usage? You’d surprise. Being a widget-supported homescreen, it doesn’t take up much the memory available, leaving the extra memory for other applications. Doesn’t believe it? Check below for the memory available in my Nokia X6 after a clean restart with Orange Tsunami Homescreen turned on.

How to install it?

Visit the dedicated thread for this Orange Tsunami Homescreen in Daily Mobile Forum. From there you can choose different style of the Orange Tsunami homescreens modified from different modders (there is a Malaysia modder as well – cnx7), but if you are using the original Nokia X6 (not sure about other model) without any extra homescreen theme except the default one (basic, shortcuts, contact bars), you have to look for the installer that mentioned something like Orange Tsunami + Orange Tornado (My wild guess is that Orange Tornado is needed to run the homescreen), those for Orange Tsunami only is unable to get installed (Prompting ‘Update error’ during installation). I would recommend the modded homescreen by Sabinkumar (which I have used to produce the screenshots above), with Nokia icons. Just in case you can’t download the installer from the forum, I had it uploaded to my Mediafire as well.

“Wait a minute. I can’t get it installed.” you said. Yes, the installers are all unsigned version, which means that in order to install them, you have to either hack your phone to accept any installations (which I do not recommend), or get yourself a three-years certificate specifically for your phone to sign the application from OPAD. It might take some time to obtain the certificate (about 1 day in my case), but once you get the cert, you can install most of the unsigned applications and games available in the wild. The signing is quite a straight forward stuff, so I will not include them in this article, but if you really require help, don’t hesitate to leave me a message, I am more than willing to help you.

In the meantime, enjoy your brand new homescreen for you Nokia X6 and stop jealous for the widget homescreen of N97. Ours is more superior than that. 😛