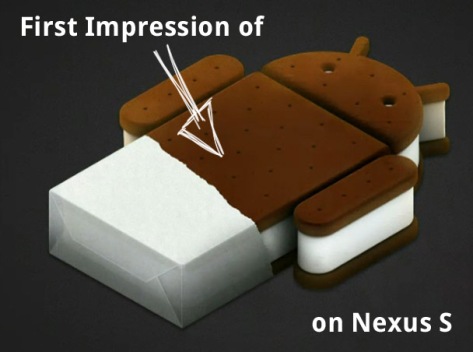 The announcement of Ice Cream Sandwich (Android 4.0) and the new Galaxy Nexus certainly are exciting news for Android supporter, though it is a little bit sad to know that Nexus One won’t get the sweetness that Ice Cream Sandwich offers (at least officially).

There has been a promise of Nexus S getting Ice Cream Sandwich few weeks after the release of Galaxy Nexus, however, I am sure most of the Nexus S (and other Android device that is eligible for the update) user couldn’t wait any longer for the release. Good news is that Google already released the SDK of Android 4.0, so while waiting for the official release, we can have a go on the sweetness via the emulator on the computer.

How about a real ROM on the device now? If you are adventurous enough to try an unstable ROM (and by unstable, I really meant it) which is not meant for daily normal usage – you got it. Drew Garen from drewgaren.com has put in some efforts to convert the available SDK into a working ROM for Nexus S and it is working surprisingly well (not entirely stable but it is surprise to see this stability from a ROM built from an SDK).

If you are interested and ready to take some risk, you can refer to the guide here on how to get it install (even if you haven’t root your Nexus S), however, if you would like to see what’s new and how does it run on Nexus S, keep reading.  END_OF_DOCUMENT_TOKEN_TO_BE_REPLACED