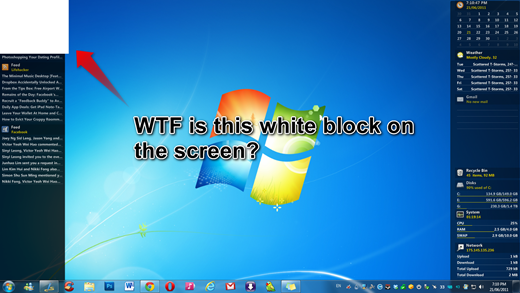 If you suddenly found that your desktop has an un-clickable, un-removable white block on the desktop, you might be in the right place. Check whether you installed Soluto (for my case, it is the culprit), if you did, just simply quit it and guess what? Problem solved.

It is apparently a bug in Soluto that is known by the developer, but it is not fixed yet in the latest version. Current workaround for this issue is to turn on the ‘Exit Right After Boot’ option for Soluto.

P/S: If you doesn’t have Soluto installed, but having the similar issue, probably it is caused by lack of memory, incomplete exiting of some applications such as IE, the installation of Double Twist etc. These are some common causes that I found during the searching. Good luck!