If you are a Gmail user, I’d suggest you to use Google Chrome as your primary browser. Besides both are services offered by Google, but when there is new features in Gmail, most likely Google Chrome user will be the one who enjoy it first (for a few months. at least). The Gmail team has found drag-and-drop is so useful in emailing that they starts to implement it into Gmail, starting from drag-and-drop attachments onto messages (which works in Firefox as well), then the drag-and-drop images into messages, and now, the reverse drag-and-drop – dragging the attachments from the messages into your desktop to save. Of course, if you have a large number of attachments, most probably you will consider to download all of them in archive form (which can be done in Gmail too), but if you are downloading the attachments selectively, and you might want to save a few clicks, this new feature is for you.

How does it work? First, you must be using Google Chrome to have this feature works for you. Move your mouse cursor to the attachments icons (as depicted below) and you should see a tooltip saying “Click to view OR drag to your desktop to save”. 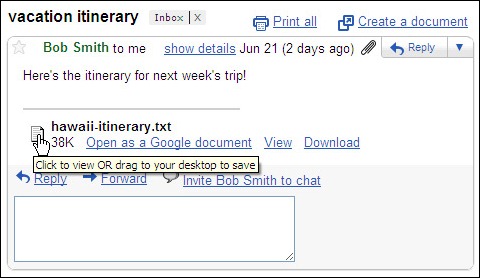 Just drag the icon and drop it to the desktop (screenshot below) and voila!, the attachment is downloaded on your desktop without requiring any extra click. Pretty nice feature eh? Since it only works in Google Chrome, dragging the icon in another browser (for example Firefox) will save a copy of the icon itself instead of the file, just hope that they can make their series of drag-and-drop features available to every famous browsers. 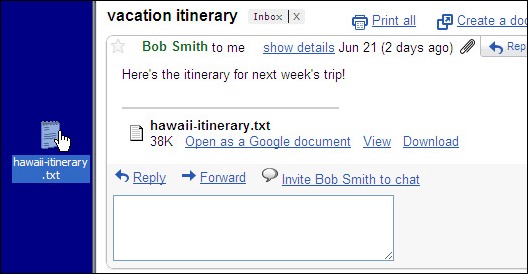