No, the above photo isn’t showing you some kind of powerful dust accumulator; they are dusts on a laptop CPU heat sink after three years of use that has made the laptop unusable due to the frequent thermal shutdowns.[Source] It is not uncommon that the computer breakdowns (especially desktop with ATX chassis) are associated with overheating problem, and most of the time it is due to the long term accumulation of dusts within the desktop chassis (unless you have a dust-filtering chassis). If you have no idea on how the dusts can cause overheating, I would suggest you to read this article in Wikipedia, there’s lots of information related to the computer cooling.

Thus, overheating is one of the major issues that can cause the computer lifespan to be shortened. To prevent the shortening of the computer lifespan, one can always remove the dusts accumulated within the chassis (including the dusts stuck on the active cooling fan) frequently; however, it is not too ideal to do the dust cleaning every single week (because I know you have some other better things to do), so you would require some indicators from the computer itself, telling you that a dust cleaning is needed, and for this purpose, temperature monitoring software comes in handy.

Core Temp is a software that is able to show the temperature of each individual core in each processor in your system (in real time). It is designed to support most of the processors in the market, but you can always check their CPU support list. It also provide you some information about your CPU, however, for detailed information, you can try CPU-Z by CPUID.

If you wish to keep a record on your CPU temperature, Core Temp also has a logging feature, allowing a user to easily record the temperature of his processor(s) over any period of time, then the data can be easily transferred into an excel datasheet for easy graphing.

Besides that, Core Temp is a very lightweight software, no installation required, and can be asked to sit in the taskbar easily. It has an option to display the CPU temperature at taskbar for quick view. At the time of writing, the latest version of Core Temp is 0.99.6, and it does have 32 bit and 64 bit flavors. Download Core Temp here.

MSI Afterburner is a overclock utility originally intended to work with MSI graphic cards, but it should works on most of the graphic cards if we wanted to use it’s monitor features only. MSI Afterburner has a Clock/Voltage/Temperature/Fan Speed/Frame rate real-time monitor, where you can have them display in graph form (as the screenshot below), or display the number on the taskbar.

Another feature that is worth to mention in this software is the user-definable fan speed. You can adjust the fan speed on your GPU based on the temperature of the GPU core – it is ideally for those who wanted the lowest noise from the graphic card during idling and maximum cooling effect during maximum GPU load.

It is important to note that although It does provide many other features to squeeze the maximum performance out of your graphic card, such as Core Voltage and Core Clock adjustment etc., but I wouldn’t recommend you to do any overclock on your graphic card except you are fully comprehend and ready for it. Else, just use the software as your graphic card temperature monitor.

Couple of weeks ago, I have my primary HDD died without any indication, and thus there goes all my important files and some downloads. If I am aware that there is a need to monitor the HDD health status, most likely I could escape the lost. And now with the new HDD, I have Active@ Hard Disk Monitor turned on every time to prevent the same thing happen again. About the software, I found that the description in their home page explained everything:

Active@ Hard Disk Monitor is a disk utility that checks and monitors the status of your hard drives to help prevent data loss. The system is based on the Self-Monitoring Analysis and Reporting Technology (S.M.A.R.T.).

Besides the detailed information about the health status of the hard disk, for easy hard disk monitoring, it can be configured to show the temperature of the hard disk, or a status indicator for all the hard disks in your computer. So don’t wait and download it now to start protecting yourself from data loss due to HDD failure.

Indeed, if you did some searching, there are quite a number of software that can do the same as what I have introduced; some with even better features. But for me, I would just need the software did what I want, and the above three software fulfilled my needs – indicators on taskbar. Below is my configuration for the indicators provided by the three software above, now I can easily monitor my CPU, CPU and HDD temperatures and health statuses at a glance, and do not have to worry about possible overheating problem anymore. If the temperature hiked up someday, most likely it is an indicator that a dust cleaning is required. 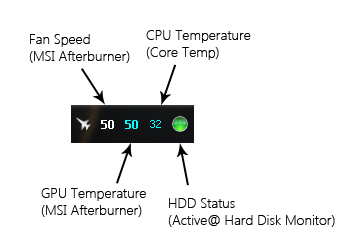 Lifehacker has put up a good article on how and why to keep your computer from overheating, so you can learn a thing or two from there. If you are looking for a reference on the average temperature that your processor should have, computerhope.com has some reference for almost  all kind of processors.